The emergency stop device of a transport vehicle

Inactivation of DNA and RNA viruses on medical devices

Method for assessing the viability of lymphotropic viruses 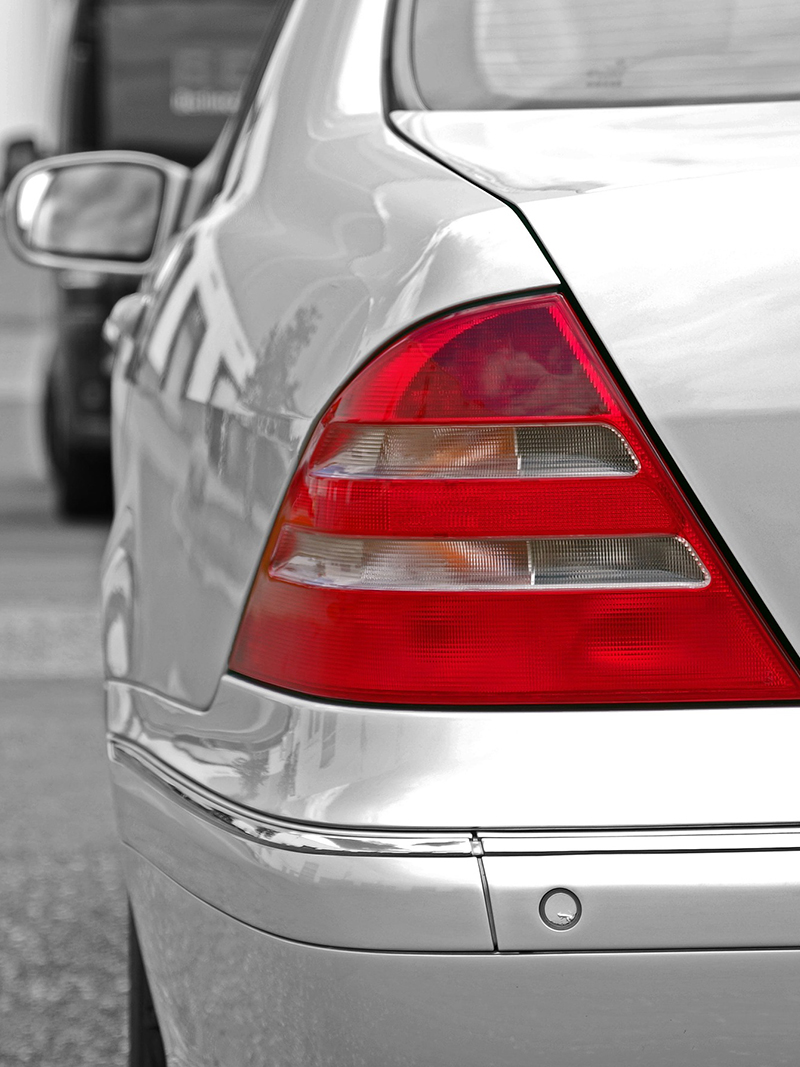 The emergency stop device of a transport vehicle

By means of the offered Device a vehicle obtains an additional functioning - the emergency stop.
When the conventional brake system, because of any reasons, breaks down, it will be possible to bring a vehicle to a stop by the fastest way, and that in spite of the loss of some brake fluid in the system and irrespective of the current speed.

The Patent Company “IntellSphere Group” submits „The emergency stop device of a transport vehicle“ which was developed and incorporated in the Republic of Uzbekistan.
The invention applies to a general vehicle safety enhancement, namely to the emergency braking.

There is a common fact that the bulk of motorcar accidents all over the world arises due to technical defects of a vehicle, whereat a substantial part of such defects refers exactly to the brake system.
The well-established brake system generally operates as follows (for a better apprehension, the simplest basic schema is provided).
By means of the offered Device a vehicle obtains an additional functioning - the emergency stop.
The device allows you to effectively stop the car in case of failure of the standard brake system for any reason. Such a reason for the offensive includes, for example, the failure of the main brake cylinder (the pistons did not return to their original position - the pedal is empty, it falls through), or the pedal has stopped, which is called a stake - it is not pressed, the system is depressurized.
If we take an unimaginable case - breakage of all brake hoses, even then the Device will stop the car, and at any speed and as quickly as possible!

Brief description of the emergency stop device The emergency stop device (Device) consists of a reciprocating electric mechanism (Actuator) and a Hydraulic Cylinder.
Actuator and Hydraulic Cylinder are hermetically fixed. The Device is firmly shored within spitting distance to an operating brake cylinder of each back wheel of the vehicle.
At the same time the Device is necessarily fixed above the operating brake cylinder of a back wheel.
The bucket of the hydraulic cylinder is fixed on a plunger of the electric mechanism.
When the internal brake system of a vehicle is intact, the Device stands in a „neutral“ condition - it sits out.
The fluid simply goes through the void of the hydraulic cylinder - this represents a usual route from a major brake cylinder to the operating one.
In case of a malfunction of the conventional brake system, for example a breakdown of a major brake cylinder, the plunger of the electric mechanism (Actuator) is activated via an electric button.
The bucket is set in motion by covering the hole. Hence, the pressure in the cylinder instantly increases affecting the operating brake cylinder. The vehicle comes to a complete stop.

One of the variants of the Emergency Stop Device is shown below. 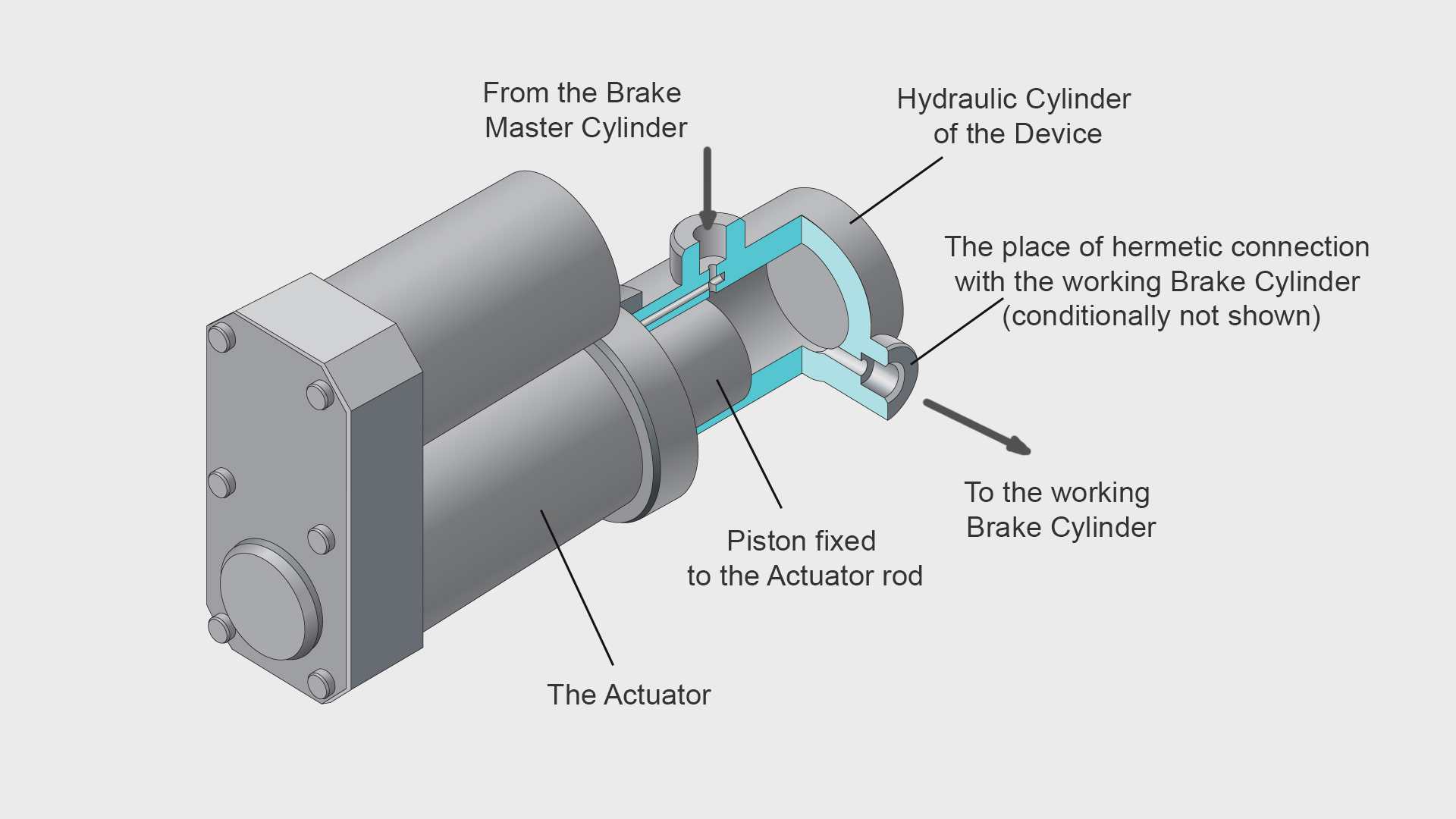 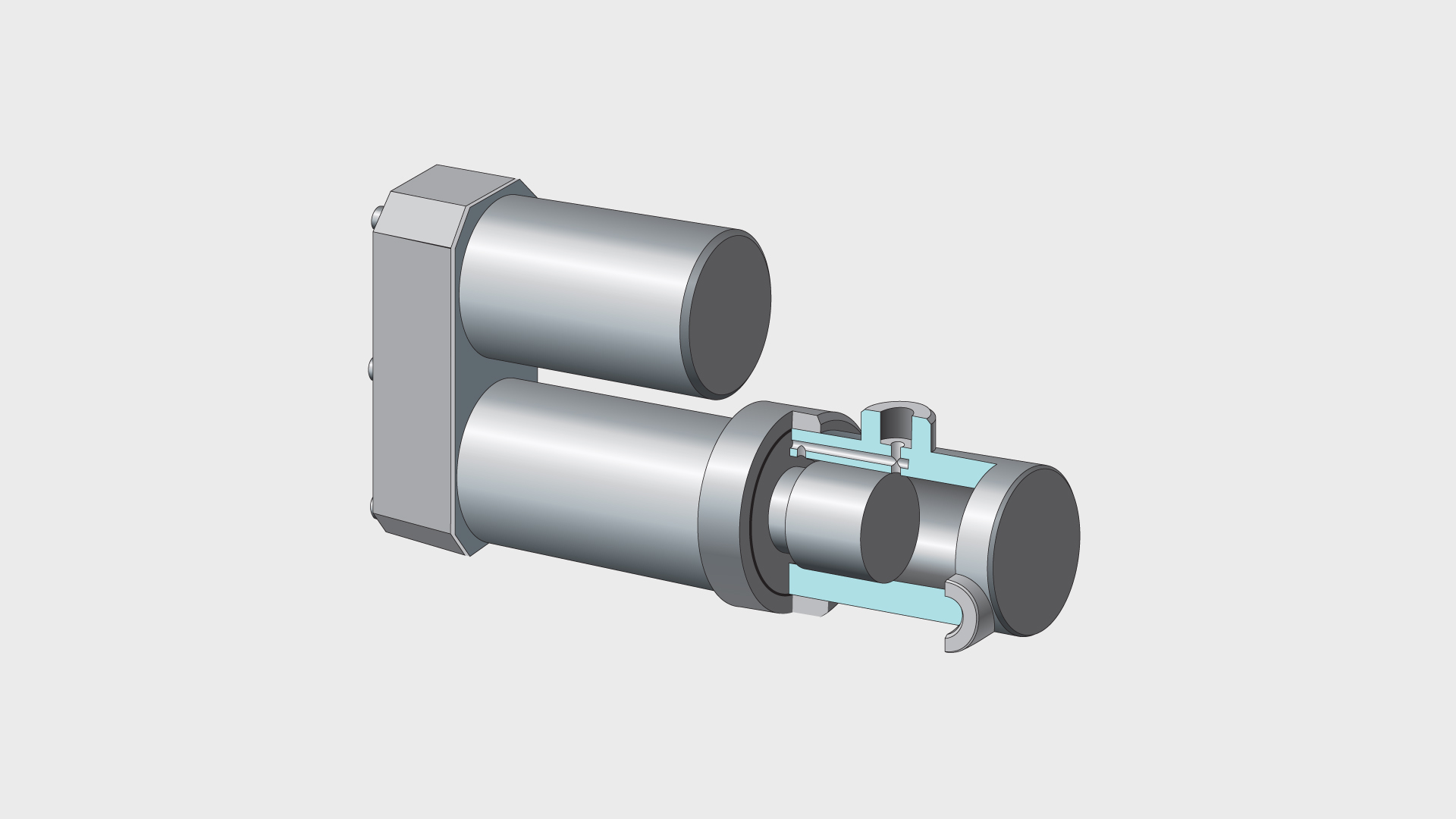 For the Device „Hydraulic brake system of a transport vehicle“ a patent for the adjuvant model No РАF 01192 was received and incorporated in the Republic of Uzbekistan After receiving the patent, an international application for invention was filed to WIPO according to the Patent Cooperation Treaty (PCT) (Application РСТ/UZ 2017/000001).

International application for an invention at WIPO under the PCT system (Application PCT / UZ 2017/000001).
After all the checks, a written message from the international search body WIPO, FIPS RF, was received with positive conclusions on all criteria that determine the patentability of the proposed device. PCT publication date: 03.05.2018 Publication number:
WO / 2018/081839. Bulletin No. 18/2018 (2018/05/03).

Nowadays, about 80 000 000 vehicles per year are produced all over the world.
We hope that our Device will find a use in some of these vehicles protecting people in accidental events.
Unfortunately, the emergency stop function in case of a breakdown of the conventional brake system is still missing in present-day vehicles.
And we are convinced that every vehicle should have available this lacking function for the safety of the voyagers, the driver and the pedestrians.
And finally, we hope that this device will help to save someone's life in the future.
(the items shoe, car battery used in the proposed schemes are removed from the site https://icons8.com).